“In a crime targeting Yemen’s identity, faith, and history, the Houthi terrorist militia has resorted to systematic methodology to destroy the educational process in Yemen.” by depriving children of an education and rigging educational curricula with sectarian militia ideas. to turn schools into military sites and force students to take up arms and fight.

“The Houthi coup militia continues to intervene to change school curricula, creating a new intellectual and social reality.” ensuring that Iran’s long-term goals are to inculcate ideological ideas that establish influence in Yemen.

The leadership of the Houthi militia in the Yemeni Ministry of Education has systematically and substantively distorted the country’s education curricula in a way that enshrines its approach and ideas, education sources in Sanaa said. It said this year’s school curricula, both in its basic and preparatory stages, showed the militia performing about 420 distortions dedicated to the idea of the Islamic entitlement to rule in Yemen and the promotion of the Imami dynasty’s divine right to the right to wealth and the requirement of dependency and submission to its leaders and symbols.

These changes to the new curricula put in place by the Houthis made the texts primarily serve their agenda, the sources said. by altering the facts of history, falsifying it, and politicizing the historical narrative. Interpretations of Prophet Mohammed’s sayings and verses serve Houthi’s ideas, NewsYemen reported.

The sources mentioned that the militia removed from schools lessons related to the progress of historical Yemeni figures who fought with Muslims against the Persians, such as the lesson of Amr ibn Ma’adi Yakrib, who participated in the battle of al-Qadisiyya and killed Rustum. They added lessons on the battle of Karbala, in accordance with the Iranian narrative, which is immersed in military mobilization and calls to avenge events that took place 14 centuries ago.

It also omitted lessons related to the anniversary of September 26, the anniversary of the Yemeni revolution against the rule of the Imamate in 1962, and introduced sectarian amendments such as the idea of a state, glorifying the symbols of terrorist militias, and planting ideas that incite violence.

Houthi militias continue to exploit the educational process in governorates under their armed control to spread their poisons, sectarian ideas, and sectarian beliefs, amid widespread local rejection of Houthi practices aimed at smoothing the community under militia control by force of arms.

The process of change in the corridors of schools and the educational process as a whole aims to produce a generation that is filled with sectarian ideas that will put the future of generations and the country in many danger. The vast process of change witnessed in the curricula, in addition to the use of schools as a place to spread the ideas of the militia, makes achieving peace with the militia impossible.

Neither the Houthi militia in Ibb province nor the rest of the province left any means or practice to foster education and spread sectarianism. It has not only made adjustments in the curriculum and in its activities throughout the year among students. It has even changed the names of hundreds of public schools in the governorate since it took control of Ibb in mid-October 2014.

The militia changed the names of schools to those of those killed on the front lines and its leaders, replacing national names such as “Revolution”, “September 26”, “al-Zubairi” and other national names with those of those who were killed, amid widespread societal rejection. Parents and students still refer to these names in old names, except in the form of scouts addressed to concerned parties under the militia’s control.

“Recently, it imposed the name of its young leader Hussein al-Houthi in a school in Al Dhihar district in the provincial capital, Ibb, in one of the most visible manifestations of its sectarian project in the educational community.” The name al-Saree Houthi came just weeks after the school’s director, known for his patriotic and educational stances, was dismissed and replaced by a loyalist.

Yemeni journalist and political analyst Abdullah Ismail said Houthi militias thrive on the environment of ignorance and poverty, which they create by disseminating their ideas, which cannot co-exist with a society with a high level of awareness. He said they can spread extremist ideas and myths. Houthi has targeted education in Yemen through, among other means, changing curricula, institutions and teachers by changing accredited teachers to others who are ideologically affiliated with him, he said.

Ismail expressed his regret over the high illiteracy rate in Yemen, which is why the Houthi group is benefiting from this, and is trying to influence those who can go to education by putting obstacles in front of them, and penetrating schools and curricula to turn children into soldiers in its unjust battle, to declare it a clear group in its terrorism.

The totalitarian extremist and sectarian view of the Houthi militias is such that this generation goes to the fires of death, and prepares soldiers who have no interest but to triumph over the sectarian idea, he said, warning that the issue is bigger than just an impact on education, but that it could lead to demographic change in society in general, which is the most dangerous thing Yemen could face in the future. 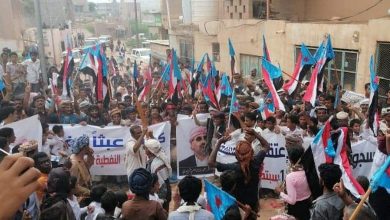