Unannounced continued cooperation between the Houthi coup militia and the Al-Qaeda terrorist organization has flourished in Yemen after the militias turned against legitimacy and took control of cities and regions. The Houthi militia succeeded in exploiting Al-Qaeda to bring chaos to the country, and the Al-Qaeda terrorist organization took advantage of the ongoing wars in Yemen against legitimacy to flourish and reorganize its ranks.

The sources confirmed that Al-Qaeda negotiator Abdullah Ali Alawi Mezahim, also known as “Al-Zarqawi,” had conducted numerous meetings with the leader of the Al-Houthi militia’s negotiator, Mohammed Salem Al-Nakhi, “Abu Anas.” The list of names in the deal came up with a number of names from Al-Zarqawi’s list, who will be released from prisons in areas controlled by Houthi militias, among them (Mayad Mahmoud, Aqlan Al-Hammadi, Ali Awad Mohammed Ahmed Al-Aqili, Abdullah Ali Naji Al-Hawri, Marzook Ahmed Ahmed Abu Sir Al-Aqili, Adel Tariq, and Walid Al-Razzaqi).

Dr. Ali Shamsan, a Yemeni political analyst, said: The Houthi terrorist militias resorted to Al-Qaeda elements in mobilizing fighters after their failure with the Yemeni tribes to compensate for their losses on the battlefronts, pointing out that the chaos caused by the Houthis in Marib and other Yemeni regions left people dying from hunger and diseases that could have been treated, and left space for Al-Qaeda in the Arabian Peninsula to prosper, despite the fact that this organization has been dealt severe blows over the past years.

The Yemeni political analyst added that the pro-Iran militias have provided unlimited support to al-Qaeda since the 2014 coup, by releasing the leaders and members of the security organization in fake deals. The first direct cooperation between al-Qaeda’s branch in Yemen, known as the “mother organization in the Arabian Peninsula”, and the Houthi militia dates back to 2015, after working as tools to implement an exchange deal between the Tehran regime and the terrorist organization to release an Iranian diplomat who was kidnapped by al-Qaeda’s branch in Yemen, in return for Iran releasing five senior al-Qaeda leaders from Iranian prisons.

The Yemeni politician pointed out that the Houthi militia used Al-Qaeda as a pretext to invade a number of Yemeni cities, especially in the south. He later discovered that these operations were carried out in coordination between Houthis and terrorist leaders belonging to Al-Qaeda, pointing out that the Houthis’ alleged operations against Al-Qaeda are purely fictive.

He said that the obvious use of the terrorist organizations “Al-Qaeda and the Houthis”, which is the card used by Iran to blackmail the region and the international community with this cross-border terrorism, to target the backbone of the world economy in the Gulf States, as well as an attempt to destabilize security and stability in liberated Yemeni regions and impede the national unity to restore the state and legitimacy. 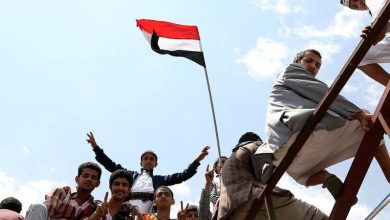