Faced with some Western criticism over political developments following the extraordinary measures taken on July 25, Tunisian Prime Minister Najla Bouden defended her country’s democratic path in the face of domestic forces that rely on external pressure to cut off any support under the pretext of “tyranny and coup,” amid a suffocating economic crisis.

At a panel discussion on Africa during the Davos Forum in Switzerland on Thursday, Bouden said that Tunisian democracy is not at risk at all, despite the low turnout in the first round of legislative elections that took place last December.

Some 11.22 percent of voters turned out, forcing a second resolution in nearly 100 districts, which the Tunisian opposition has used to question the legitimacy of the electoral and representative process.

Bouden predicted better voter turnout in the second round of elections, which will be held on the 29th of this month.

Asked by an Associated Press reporter about the state of democracy and political pluralism, Bouden said “there is no fear for democracy at all, and the country is seeking a new paradigm by moving from one regime to another”.

The Tunisian government has been widely criticized in Tunisia, where many national organizations and party forces have called for changes or amendments to be made under the pretext of failure in the face of burning economic issues.

Tunisia’s largest labor organization, the General Union of Tunisian Workers (UGTT), has repeatedly attacked the government over its reform program with the International Monetary Fund (IMF) and the lifting of subsidies and the sale of public enterprises.

Despite Bouden’s meeting with Noureddine Taboubi, the union’s secretary-general, and Samir Majol, the president of the Federation of Industry and Trade, this month to ease tensions, union criticism of the government and the performance of a number of ministries continued.

The Tunisian president has repeatedly denounced attempts by some political forces to obtain foreign support to topple the new experiment, accusing it of being an apostate.

The opposition Free Destourian Party (PDL) had called on the United Nations not to endorse the legislative elections, which it described as “illegitimate,” and not to recognize the parliament that will be created. Meanwhile, leaders of the Salvation Front, led by the Islamic Ennahdha Movement, have strengthened their communication with European and American officials under the pretext of preserving the democratic process.

During her visit to Davos, the Tunisian prime minister is seeking economic support in light of the country’s financial crisis, the loss of several key market items, and rising inflation and trade deficits.

Tunisia is awaiting funding from the International Monetary Fund (IMF) of 1.9 billion dollars to deal with the crisis and pay some of its suppliers.

Bouden met with the head of the IMF, Kristalina Gorgiva, in Davos, in an indication that progress has been made in negotiations to obtain the required support.

Before the Presidential Elections... How Does the Turkish Government Deal with the Opposition?

The Many Health Benefits of Eating Green Vegetables 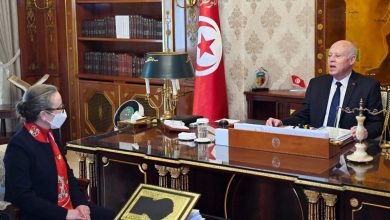